Local youth to come together next week for Larson benefit concert | SkyHiNews.com
YOUR AD HERE »

Local youth to come together next week for Larson benefit concert

A benefit concert is planned next week for Trinity Larson, a 12-year-old from Granby who was badly burned early last month in a backyard fire.

Led by youth, the benefit concert will be held to help raise funds for Larson’s family, who are being forced to contend with both the tragedy that befell the young lady and the extensive costs associated with her lengthy hospital stay and recovery process.

Over a dozen local youth from several Grand County churches will be performing during the event, according to concert organizers.

Other local children will also be assisting with the event by handing out programs, refreshments and handling additional duties. Concert organizers also plan to have several local pastors in attendance.

The concert, called Tunes for Trinity, is scheduled to begin at 7 p.m. May 11 at the Winter Park Christian Church in Tabernash. The event is open to the public. Donations will be accepted at the Concert with 100 percent of donations collected going to Larson and her family.

Larson was in the backyard of her family’s home April 2 when a child poured gasoline on top of a fire. She was quickly transported to Middle Park Medical Center-Granby and was loaded onto a helicopter headed to Children’s Hospital in Denver for advanced care.

Larson sustained second- and third-degree burns over most of her body. The burns affected her head and face along with the front of her legs, arms and torso. She is still undergoing extensive medical care in the intensive care unit at Children’s Hospital and continues to work through what will be a lengthy recovery process. 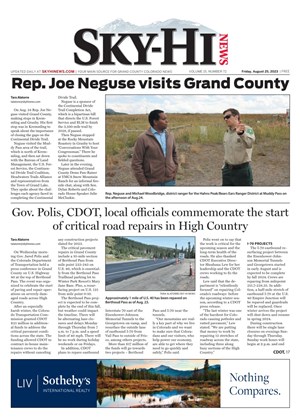